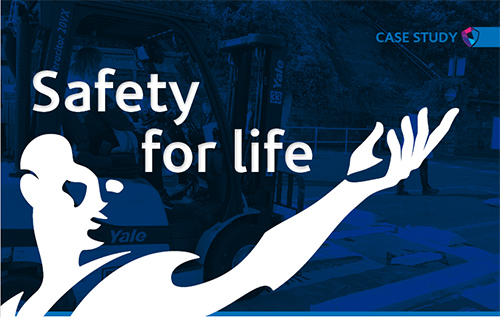 Achieving zero injuries, waste and harm might seem like an impossible vision for a global organisation employing more than 35,000 people across 80 countries, but Netherlands-based AkzoNobel’s ambition is just that. We found out more.

Trough a combination of worldwide HSE ‘common platform’ programmes, core ‘life-saving rules (LSRs)’ for higher hazard work and a commitment-based safety culture, paints and coatings manufacturer AkzoNobel has already reduced its employee total reportable injury rate by more than 40% since 2014, meeting its 2020 target in 2017, three years ahead of schedule.

“We have what we call our ‘common platform’ for health, safety, environment and security (HSE&S),” explains Sonia Pires, Corporate Director for HSE&S at the company, whose brands include Dulux, Polyfilla and Cuprinol. “We’ve been standardising our programmes, so we have one common approach right across the company. It’s a way to homogenise best-in-class programmes, leverage good practice and take advantages of synergies and learnings across sites.”

The concept of a common approach applies in a broader sense too, so the focus is not limited to direct AkzoNobel employees. Alongside the common practices for safe working, there are standardised contractor management and evaluation procedures. “We have 125 manufacturing sites, many warehouses, R&D labs,  training centres, offices and stores, as well as sales and technical services activities, including people performing work at customer sites,” says Pires. “It’s very important for us to cover anyone, anywhere, who works for AkzoNobel whether as an employee, temporary worker or contractor.”

Alongside a reduction in the employee (including temporary workers) total reportable injury rate – the number of injuries, including fatalities, resulting in a lost time case, restricted work or requiring medical treatment by a competent medical practitioner per 200,000 hours worked – from 0.34 in 2014 to 0.2 in 2017, the downward trend in total reportable injury rate extended to contractors: in 2017, there was a 39% decrease over 2016. The 2017 annual report also shows that three-quarters (77%) of company locations had been reportable injury free for more than a year.

Do the right thing

The common platform incorporates specific initiatives defined at the beginning of each year. “We sit down and look at performance and identify opportunities for improvement,” says Pires. “So we are constantly seeing if we need to address a topic with more or less emphasis while always pursuing our overall strategy and vision, which is to achieve zero injuries, waste and harm through operational excellence.”

The company takes a determinedly bottom-up approach to safety, at the same time as recognising the importance of senior management-level leadership. “We feel we will be in the right place when we have safety embedded in everything we do,” says Pires. “We don’t want to manage by dashboard; we want people to ‘do safety’ because they believe in it, because it’s the right thing to do and because we care. Driving forward a commitment-based safety culture is at the heart of our mission.”

Engagement and participation at all levels is critical. “Our executive committee really walks the talk,” adds Pires. “It’s about leading by example, and finding new ways of engaging people. We never take anything for granted. Each time we have a new initiative we think about how to engage employees, giving them the opportunity to participate in activities so they really feel part of what we’re doing.”

To this end, the safety team works closely with its colleagues in communications. “We think about the content and they come up with the visuals, including movies, animations or virtual reality” says Pires.

Formal training is a key part of engagement. “Lots of the things we do are very technical,” explains Pires, “so training and information are crucial.” Beyond that, it’s about reinforcing issues and approaches on a daily basis within all activities, whether that be toolbox talks or project meetings.

AkzoNobel has an overarching programme known as ALPS (AkzoNobel Leading Performance System), which is designed to increase people capability and engagement and overall performance. “This goes beyond safety,” emphasises Pires. “But safety is integrated into it.”

ALPS generates standard work processes at different levels of the organisation and at all sites. “Safety is always embedded in the agendas within those processes,” she explains. “These provide opportunities to engage people about safety every day, and for people to raise any concerns or issues they have observed or feel uncomfortable about. We also follow-up any near misses or issues raised at the site or at other company locations when it is relevant.”

“Our executive committee really walks the talk. It’s about leading by example, and finding new ways of engaging people”

Backing up this approach, and at the centre of everything AkzoNobel does, is the “Golden Principle”, whereby anyone must immediately stop any work if they feel there is an unsafe situation. Behavioural-based safety initiatives are underway at all sites, including non-production locations such as offices, stores, warehouses and laboratories. These programmes incorporate worker recognition and rewards. “Recognition drives behaviours,” says Pires.

“It’s important to recognise good behaviours at the right time and on the spot by saying: ‘Great job, thank you’,” she explains. On a more formal level there are awards, including the annual company-wide HSE&S ‘Take Care’ awards and a ‘Winning Together’ exercise, which goes beyond safety but includes safety and rewards teams for working together cross-functionally. Individual sites also have their own initiatives such as employee of the month, or may choose to link safety into wider bonus schemes.

“We work across the globe,” says Pires, “so it’s interesting to see different cultures and methods of engagement. If you’ve got an idea in one country that you think would work elsewhere, you need mechanisms to spread that idea. We are organised by regions and have regional management teams and global calls where we bring all the health, safety and environment people together. We also have global management team meetings where we share incidents, learnings and best practice; and if that best practice is really good, we make it a new common requirement.”

The common LSRs (see box above, right) are part of AkzoNobel’s flagship injury prevention programme and apply to higher risk activities. “Like most industries, we perform tasks that have a higher risk attached,” says Pires. “And we understand some of these could be life-threatening if not conducted in the right way, so we need to have very clear expectations and guidance.

Each of the eight rules is underpinned by ‘life critical procedures’, which provide clear details on how to carry out certain operations, such as entering confined spaces or servicing and repairing equipment. She likens the rules to the Ten Commandments. “They are our way of working, just as the Commandments are somehow deeply embedded in, and still govern, our society, even though they were written thousands of years ago.”

Pires believes the LSRs strengthen the common safety platform by providing a universal language. “You don’t have to explain it to anyone: people immediately know what we are referring to. It’s good to have a simple, common terminology right across the company’s operations, so everybody is speaking the same language.”

Above all, she emphasises the importance of explaining the rationale behind the rules very early on. “To drive commitment, we needed to be clear about the ‘why’ before we focused on the how to do it,” she says.

Last year, AkzoNobel launched a ‘call for action’ on lift truck safety, which included the launch of new common minimum requirements, one of which relates to segregation between pedestrians and lift trucks. “On pedestrian segregation, we really called for two things,” explains Pires. “The first was to review traffic plans on site because there is often an opportunity to improve the way materials flow and prevent the forklift entering production areas, for example. The second was to focus on physical segregation, not only drawing a line on the floor but having physical barriers.”

The emphasis on lift truck safety extended to AkzoNobel’s organisation-wide safety day where every site takes time out to get involved in safety-related activities under a common theme. “In 2018, the theme was ‘Beware the line of fire’ and for the first time included an innovative virtual reality (VR) game,” says Pires. “This worked well and made people feel like they were in the middle of the action without being at real risk.”

The ‘line of fire’ concept is based on the fact that incidents are often caused by people inadvertently positioning their bodies (or parts of their bodies) in harm’s way. In 2017, 58% of reportable injuries involving AkzoNobel employees, temporary workers and contractors were caused by people getting into this line of fire, resulting in incidents such as being hit by an object/splash; getting stuck between, cut or hit by falling objects; and hit by trucks or other traffic.

Using this as the safety day theme, the idea was to raise awareness of typical line of fire exposures and encourage people to stop and take a 360° scan of their environment. The aim was to empower workers to pause, take the time to look for risks around them and then act to resolve them in their daily lives, whether at work, in the car or at a customer’s site.

Sites also organise their own initiatives for safety day. “These are becoming more engaging each year,” says Pires. “People do hands-on exercises, and a lot of these related to lift trucks this year”. One exercise, at the Felling manufacturing facility in the UK, involved inviting pedestrians to sit in forklifts to help them stop and think about what the driver can and can’t see.

“There are many blind spots that a pedestrian might not appreciate, but once they are in a forklift, these become pretty obvious,” explains Pires. “If you know there are some bad angles for a driver then you are much more conscious of not taking for granted that a truck will stop if you are crossing.”

It’s back to people understanding the ‘why’, she argues. “If you ask people simply to stay safe they may not understand, but if you show them the ‘why’ then it becomes much more obvious, and easier to get buy-in.

“Initiatives like our VR game can be fun, but they are also powerful from a learning perspective. We have to get to people’s hearts, not only to their brains,” Pires concludes. “Our slogan is ‘Take care’ because ultimately, it’s about caring.”