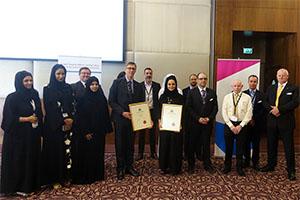 The UAE Branch hosted its 2nd Annual Symposium and AGM recently, which was attended by some 135 professionals. The event was a ringing endorsement of the Institute’s strategic approach towards growth in the region, with a keynote address provided by the Deputy Director General of OSHAD, Ms Reem Al Nuaimi, who, as well as accepting IIRSM Corporate Membership on behalf of OSHAD, was conferred as an Honorary Fellow.

As well as outlining IIRSM’s planned Risk Management Qualification framework, the event brought together an array of thought leaders to present on and discuss key industry challenges. Key government officials such as Dr Ali Qaiwani (Director of Labour from the Emirate of Ajman and Honorary IIRSM Fellow) were delighted to meet the Institute’s Chief Executive, Phillip Pearson, as well as other representatives from regulatory bodies such as the Department of Transport.

Nineteen organisations exhibited at the symposium, covering pertinent areas of risk management such as information and communication, and learning and development. We were delighted to welcome UAE Branch sponsors along with many other suppliers and consultancy organisations – all of whom were extremely pleased with the ability to engage with participants which have led to lots of positive connections and avenues to follow up on.

With an innovative stage and set design, combined with practical demonstrations and a truly engaging agenda, the feedback received from attendees on the day described the event as being “a breath of fresh air for the region”.

This event was followed by our Annual General Meeting. One of the first items on the agenda was the Branch elections, specifically to elect the successor to Vice Chairman Frank Higgins, who resigned following many years of devoted service. There was a floor vote on the day which, combined with the numbers from the online votes, saw Luay Salih elected. Given the close margin in the election and the rapport throughout the region, Jason Woods will join the committee as Branch Officer, given the value that he has to give to the IIRSM UAE Branch.

IIRSM HQ would like to thank the UAE Branch Committee for their hard work and dedication.