The true cost of reputational damage 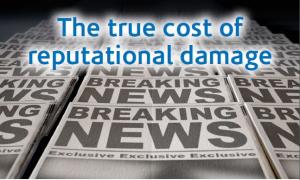 If your company appeared in court tomorrow and was hit with a multi-million pound fine, could it survive? Even if it had the means to pay, the reputational damage it would suffer would almost certainly have a detrimental effect on business.

Since the revised Sentencing Guidelines came into force earlier this year, big businesses have been hit with huge penalties thanks to their turnover. The pages of this issue alone document Tesco’s £500,000 fine after a worker suffered bruises following a fall, Network Rail’s £4 million penalty after a pensioner was killed on a level crossing, and Merlin’s £5 million fine following the Alton Towers rollercoaster crash – the biggest penalty to date for a non fatal incident.

As well as the dramatic increase in the levels of fines – which incidentally are more likely to make the headlines – Section 10 of the Corporate Manslaughter and Corporate Homicide Act allows the courts to impose publicity orders on convicted firms to attract additional adverse publicity and potentially damage its reputation. Previous notices have either appeared in local newspapers or, in the case of joinery firm Peter Mawson, on its website. Mobile Sweepers (Reading), which was convicted of corporate manslaughter in February 2014, was required to take out ads in two local newspapers.

But it’s not just killing workers that attracts bad publicity. After the King’s Cross fire in 1987, travel on London Underground dropped by 6% and took two years to recover. It is unlikely that 31 separate deaths would have prompted the same response.

Last year a Deloitte Touche Tohmatsu survey revealed that only 19% of senior executives would say their companies deserve an “A” for their ability to protect against and respond to reputation risks, while 39% said the maturity of their risk strategy was average or below average.

In today’s global, fast-moving social media landscape, reputational issues can spread and amplify extremely quickly. Often it will come down to the speed at which issues are identified and how they are subsequently handled.

Does your organisation have a strategy to protect its reputation? Perhaps it’s time you addressed this emerging risk.