Making the world a safer place 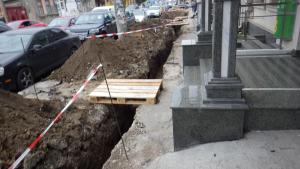 The internet is an incredible tool for learning and sharing, but unfortunately you don’t have to look too hard to find videos and photos of people precariously balancing at enormous heights, or knocking down walls they are standing on. These health and safety ‘funnies’ are normally accompanied by comments labelling these people as idiots and fools for their actions.

“That’s not the case and I find it quite disturbing,” says Ian Harper FIIRSM. “These people are not idiots or suicidal. It’s just in some parts of the world, they simply do not have the training, knowledge and equipment to do it any better. It’s not that they don’t have safety standards – safety professionals are few and far between.”

One day after a conversation about worldwide safety standards, Ian, a IIRSM Council Member, and his colleague Alex decided to see if they could do something to help. They had been working with the Kier Group on underground service damage. As there is an ever present risk of injury and damage as well as service loss when digging in the street, it was agreed they would upgrade to a new type of cable avoidance tool (CAT) to try and find services before digging started. It got them thinking about what they could do with the old ones – could they reuse them?

Keir and GAP Hire agreed, but instead they generously donated new ones. “But they are not easy to use and the recipients needed training,” explains Ian, “this meant Alex and I would have to deliver them in person... but the question was, where?”

Fortunately a colleague knew of an area with significant service strikes, damage and injury that may need help: Moldova. Nestled on the eastern side of Romania and landlocked the other side by Ukraine, Moldova’s biggest export is wine. Of the three million Moldovans in the world, a third of them live outside the country. “It has the lowest GDP in Europe and while trying to do the best it can, financially the country is not able to achieve the safety standards in the UK and Europe, though it aspires to,” explains Ian. “The smaller contractors certainly couldn’t afford the kit we were offering. It was agreed we would donate the equipment to contractors in Moldova working on the electrical and gas networks and provide training.”

But Alex had another idea. Recently Kier had acquired May Gurney in East Anglia and a rebranding exercise had taken place – the result was lots of PPE with the wrong logos, destined for the skip. Washed and laundered and with Kier’s blessing, the kit was loaded into the van, along with donated car seats rescued from cars being scrapped (these were independently assessed and cleared for reuse). “The fatal accident rate in the country is very high and with a lack of emergency services and a poor road network, anything that could help was welcome,” says Ian.

Though the two men had a difficult journey thanks to operation stacks and storms preventing ferries leaving the dock, breakfast in Baden Baden, lunch in Vienna and an evening meal in Budapest gave their adventure a cosmopolitan feel.

The team delivered three training sessions on cable and service avoidance to contractors working on infrastructure in the country where they had nothing to very little before. They left documentation, procedures and guidance in Russian, kindly written translated by volunteers in the UK. They issued PPE to prevent road traffic accidents, dispensed some knowledge on sites they visited and issued sports kits and car seats. In total £60,000 of goods were donated, in addition to the free consultancy, and the initiative created a link to provide more information and support remotely.

So what did they get out of it? “A number of things,” explains Ian. “When we told a staff member on the ferry what we were doing, she gave us a big discount and our tickets came back marked as Humanitarian Aid. The drive was spectacular and the countries of Romania and Moldova are beautiful – Castle Dracula was on my bucket list of places to go.

“But more importantly, now we look at those pictures on the internet and understand. Some of the ‘funnies’ of people putting their lives at risk is not because they are stupid. They have to make a living with what they have. Alex and I have made a change for some of them and we are determined to do more. If we all do a little bit, the world would be a much safer place.”

More projects are planned for Eastern Europe – if you’re interested in volunteering, please get in touch by emailing ian.harper@hsrm.co.uk.