Home » Getting leaner comes at a cost

Getting leaner comes at a cost 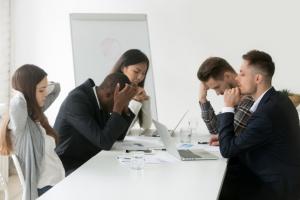 Redundancy is often seen as a way to reduce costs, implement ‘lean’, and ‘survive’ in difficult markets, but decisions often lack the rigour around selection and line manager preparedness which has consequences for all parties affected by the process.  These risks can be reduced or mitigated through better understanding.

When organisations need to react to competing pressures or simply look to cut costs, they often turn to headcount to find opportunities to cut costs.  That should come as no surprise.  With wage costs typically between 40% and 70% of all costs, a small cut in the wage bill can have a significant impact on total cost and profit.

With the advent of improved workforce metrics, benchmarking now plays a far greater role in decision making about what cuts to make, where to make them, and how significant they should be.  Data for comparison exists business to business, site to site, or through more advanced analysis of factors such as sales team performance, production line productivity or back office efficiency.  One of the problems with benchmarking is that the focus is on the numbers and not on the reasons for the numbers.

Decisions are often made well away from operational activities where there can be limited understanding of the consequences of removing significant cogs in the organisation.  Where there is local involvement in decision making, it is only natural to expect there to be a natural sense of self-protection or self-defence amongst those affected by the changes, as well as other explicable motivations and unconscious biases.

It is not unusual for organisations to target reductions to a particular layer – for example by reducing the numbers of managers, supervisors, or support staff that they employ.  However:

An important consideration has to be whether it is genuinely possible for the organisation to do the same or more with less, or whether there are activities that are no longer required.

Language and the Primal Instinct

Redundancy situations are often framed around terms like ‘survival’ or ‘competitiveness’ which can have the effect of bringing out something quite primal in individuals at a time when tensions are already likely to be heightened.  These can be made worse by deadlines or time pressures to get the job done, and regular messages from others that ‘process’ needs to take ‘precedence’ over people.

All of these can combine to produce questionable decision making which is often less rigorous and less subject to the types of formal and informal risk assessments that might form part of a closure of a part of an organisation.

Organisations attempt to put right some of these risks by introducing factors for selection.  The traditional method of ‘last in first out’ as a means to safeguard the knowledge and experience in the organisation has largely been replaced by a series of measures that put work colleagues against each other in a competition to find the most competent, efficient, flexible, attending worker, which creates a hostile and sometimes toxic environment which can last for years after the reductions have taken place by incentivising secrecy, dishonesty and presenteeism.

Where possible organisations may also explore options like voluntary redundancy, which may solve some of the disputes at play, at least until some requests are declined, but with voluntary redundancy generally incentivising the departure of the more experienced, better paid, employees, the risk of lost organisational knowledge substantially increases, especially on large scale redundancies.

In any event, these measures seldom reflect the true contribution made by employees to the performance of their employer.  That is not normally possible to judge until they have left.

When the engineer left the business to set up as a consultant, her old employer did not have to wait long to call her in.  At the end of their first shutdown, they were having problems restarting the plant and gave her a call.  They were surprised to receive her invoice which read:

Every departure, no matter how well considered, carries with it the loss of organisational knowledge that individual holds.  Even organisations that are good at documenting the policies and procedures they use, do not always record why the process was necessary in the first place, and that means they run the risk that procedures will be replaced as the lessons of the past are lost.

With all this in mind, it generally means that those that leave have little or no loyalty to their previous employer, and can carry that emotion with them into their next role, whilst those that remain are left with a sense of survivor syndrome or a sense that they might not want to remain a part of an organisation that could just do what it has done.

There are good ways to make redundancies, but no redundancies are entirely painless – whether that is to the decision maker, the person implementing the decision, the job holder, or those that remain.  The process can be greatly enhanced by considering the inherent risks in the process and taking steps to reduce or mitigate them.