Home » Blog: Near Misses or the Consequence?

Blog: Near Misses or the Consequence? 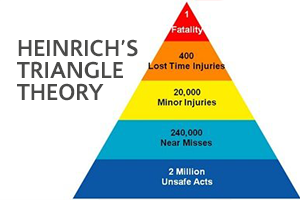 In the Construction Industry; ‘Why is the Near Miss still seen by operatives as ‘Grassing on one Another or Telling Tales?’’ This may be affected by an image of the construction workers being ‘macho’ and with a transient workforce that are employed and it could also be influenced by pressures on production over health and safety.

The well-known Heinrich’s Triangle Theory; shows the study from Herbert William Heinrich, who suggests that for every 240,000 Near Misses there will be 20,000 Minor Injuries, 400 Lost Time Injuries and 1 Fatality.

So why is it so difficult to get Near Misses, Unsafe Conditions and Acts reported?

Current thinking of the meaning of a Near Miss has moved on from the traditional;

‘A brick fell from the scaffold and almost hit someone’ to

‘The toe board is missing, and the brick could be knocked off and hit someone’. This is capturing the Unsafe Conditions as well as the Near Miss, before an incident happens.

One theory about why Near Misses and Unsafe Conditions are under reported is that reporting a Near Miss or an Unsafe Condition will ‘Get me into Trouble with management’ another could be ‘Why should I, it’s got nothing to do with me?’

It’s been refreshing for me to work in the Highways Maintenance Sector where Near Misses and Unsafe Conditions are taken seriously by the operatives, and are reported on a daily basis. As you might expect the system can sometimes be misused somewhat with Near Misses about ‘cats running across the road’ and ‘shoelaces not tied’ being reported, but every now and then some absolute nuggets are submitted that have actually prevented an accident from happening or helped to make a site safer. A recent example submitted includes:

There is no safe way to get in the tipper of the new van, there’s no ladder or step. You cannot place your foot on the wheel either, as it has a mud guard. This report prompted the retro fitting of a bespoke step on both sides of the van to allow for safe access and egress.

In my opinion the key to getting Near Misses and Unsafe Conditions reported is held with managements approach to dealing with them. If the approach is always based around investigations and disciplinary actions, or the reports are ignored, then it will not happen.

On the other hand if the approach from management is of appreciation and recognition of the operative for submitting Near Misses as well as dealing with the situation promptly, then this makes a huge difference.

Operatives that report Near Misses and Unsafe Conditions need to be recognised amongst their peers and a good way to is to promote this by ‘Near Miss of the Month’ awards and displaying a monthly top 10 reported Near Misses for all to see.

Our management approach needs to be firstly, ‘How can the situation be made safe?’ followed by ‘Thanks to the person that submitted the Near Miss or Unsafe Condition’, and other actions such as disciplinary only where a blatant disregard to Health and Safety has been identified, and only then. Near Misses are an everyday occurrence and dealing with them should also be an everyday occurrence.

Looking back at Heinrich’s Triangle, the question has to be asked:

If we are not reporting or dealing with Near Misses and Unsafe Conditions properly, will we ever get to the point in time where Unsafe Acts are openly reported and dealt with?

Think about it, how many Near Misses have you witnessed over the past week and not reported? For example, poor driving standards from a colleague, or an operative not wearing the correct protective equipment.

Report todays Near Miss or deal with the Consequences tomorrows, what would you prefer?