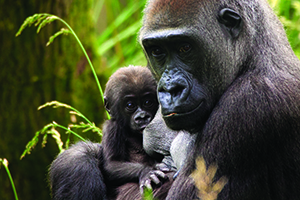 It’s hard to think of many health and safety jobs where you can see gorillas from your desk, but it’s one of the many unique attractions of Ian Stacey’s role as Head of Health, Safety and Security for ZSL (Zoological Society of London). Working for the conservation charity, and “contributing to the bigger picture” of the organisation’s activities around the world, helps create a real cohesiveness within the health and safety team – and it’s his team that Ian places at the heart of ZSL’s recent achievements in improving safety culture and risk awareness.

“There’s a real sense of belonging in the team,” confirms Ian. “We’re committed to what we do; we care about what we do. Every member of the team contributes fully: they understand their responsibilities and where they fit into the team, and we all offer each other support.”

To describe Ian’s remit as broad is underselling it. He and his team are responsible for health and safety at ZSL London Zoo, ZSL Whipsnade Zoo and operations in nine countries overseas. In numbers, this means ,more than 1,000 employees and over 800 volunteers, nearly two million visitors annually and 23,000 animals. As well as the “traditional” hazards and risks, there are the security implications of being a high-profile attraction in London, not to mention the less everyday challenges, such as planning the safe manual handling of three new brown bears at Whipsnade. “Our activities are complex,” agrees Ian, in a nod to understatement.

His career began some distance from health and safety, but risk management has always been a feature. Ian joined the military at 17, serving in hostile environments before leaving the army after six years. Transitioning to civilian life, he took a job “on the tools” at tea giant Tetley, where he soon moved into a facilities role and – with the support of a mentor he still counts as a friend – rose to the role of manager of soft services. After Tetley, Ian took up the role of facilities manager at the BBC with responsibility for Broadcasting House.

“It was at the BBC that I began to understand health and safety: its value to the business and how it can be managed.”

After 15 years at the broadcaster, the trend for outsourcing services saw him TUPE’d to different external firms, while still working for the corporation. “I did various roles, but the ones I found most enjoyable were in the continuity and risk team, which was responsible for fire, environmental, security, health and safety as well as business continuity.”

Ian was approached about the newly created role of Head of Health, Safety and Security at ZSL just over four years ago – his experience managing during change and transition at the BBC being one of the attributes ZSL was seeking.

“I came along for the interview and I fell in love on day one – with the organisation and ZSL as an employer,” he recalls. “Looking out at the gorillas in London Zoo from your office: it doesn’t get much better!”

Ian took up his post in May 2015 and has overseen a period of significant change in risk management terms.

“It’s a completely different organisation now. There’s been a huge transition: we’ve got great leadership and a really good strategy. The BBC was very much about compliance. Don’t get me wrong: we are at ZSL, too. But here we’re about keeping our amazing teams safe so they can do their conservation work around the world.”

Earlier this year, ZSL was the joint winner of the Barry Holt Award for Outstanding Practice at the IIRSM’s Risk Excellence Awards. The achievement reflects the “change in culture” at ZSL, says Ian: “People take responsibility for safety; they understand their roles.”

The award win was the result of the success of Ian’s strategy to reinvigorate risk management. “The strategy goes back three years,” he expands. “We started off with fact-finding: talking to people and getting their input. We didn’t want to tell people what to do because it’s not effective. It was about collaboration; you only get sustainable change through engagement.”

The resulting strategy is based around five themes.

Leadership and management: ensuring senior managers ‘walk the talk’, for example through director safety tours which ensure engagement with teams on the ground. “The senior management team is completely committed,” says Ian.

Competency: making sure employees have the skills to perform their roles safely, whether the risk is working at height or handling chemicals. “Over the last 12 months we have developed and launched a wide range of training packages/modules.”

Risk management: establishing a framework for assessing and controlling risks as far as practicable, with a transparent process for judging where capital investment is needed.

Health and wellbeing: developing policies and activities to promote wellbeing.

Emergency preparedness: developing an emergency incident framework to ensure there is a coherent transparent and accountable process for responding to incidents for the entire organisation.

Central to the success of the strategy has been developing talent within the safety team itself. As well as supporting team members to undertake professional qualifications – such as NEBOSH and first aid train-the-trainer qualifications – and encouraging them to take advantage of ZSL’s corporate membership of IIRSM for continuing professional development (see box, left), Ian has thought a lot about how to offer his seven-strong team the opportunity to develop their skills, progress their careers and gain seniority.

“My team are really good at what they do. They understand the nuances of working in an non-government organisation. But if I’m not going anywhere, where do they step up to? I have to recognise retention risks.”

The recent departure of a team member gave Ian the opportunity to rejig job roles, broadening the remit of one safety advisor to cover both ZSL Whipsnade and London Zoos, and introducing a junior role to support the overseas risk adviser, allowing the risk adviser to gain line management experience.

“The key word for me is trust,” he says. “We’ve created an environment where we can all be honest; where we admit our mistakes. Communication is important. We meet regularly – and in some unusual places! We’ve had meetings on the Whipsnade train, and a couple of years ago we had a team-building session in a pathology lab, where a postmortem was being carried out on a porpoise that had ingested plastic. It was really informative.

“We’re a diverse and professional team, with lots of different experiences and knowledge, but we’re really close – and there’s lots of humour, which is important.”

For the future, Ian hopes to see the sector-led revision of HSG 219, Managing Health and Safety in Zoos – which he is leading – come to fruition and achieve the HSE stamp of approval. But for now he is able to pause and reflect positively on the cultural change achieved at ZSL under his stewardship.

“We can’t be risk-free, but if people have the right skills and understand their responsibilities, we’re a long way to improving how we manage risk.”

“What I like most about our membership of IIRSM is that it’s a partnership,” says Ian. “We are a fairly new corporate member of IIRSM, but our membership has already opened up various opportunities.”

Three years ago, Ian went about restructuring the health and safety department at ZSL, whose operations include London Zoo and Whipsnade Zoo, as well as conservation activities overseas in nine countries.

“As you can imagine, because our operations are very seasonal in the UK, there’s a fair amount of capacity in some roles. As a first-aider, you might be really busy in the summer holidays with all the school children visiting, but it’s another matter on a cold November morning!”

Ian looked at individuals’ roles and made sure everyone undertook basic NEBOSH training and first aid train-the-trainer courses. Once all his team members had achieved their qualifications, he decided that ZSL would benefit from joining IIRSM as a corporate member.

“The main reason was the continuing professional development (CPD) it offered my team members,” he explains. “Corporate membership gives us access to IIRSM’s one-day seminars on a range of subjects, from best practice on topics such as respiratory health, to seminars featuring mock trials that illustrate the legal implications of getting things wrong.

“Corporate membership of IIRSM also allows each individual within my team to take up personal membership, which is great because it means they can keep on top of all the various legislative changes, developments in best practice, and changes to standards.”

Another benefit for Ian’s team members is the opportunity to network with fellow professionals. While he’s proud of his team and the close working relationships within it, he’s realistic about individuals’ personal career ambitions.

“I want all my team to stay with ZSL for as long as possible,” he says, “but if they choose to move on for career development, their relationship with IIRSM makes them more marketable.”

At an organisational level, ZSL’s corporate membership of IIRSM is already opening up opportunities for sharing experiences, expertise and best practice. ZSL has engaged in events with local business partners to share insight into different working practices, and – in part due to Ian’s background at the BBC – fellow IIRSM corporate member ITV expressed an interest in working with ZSL.

“If it hadn’t been for IIRSM, there wouldn’t have been that connection,” Ian confirms.

ZSL’s success in being named as the joint winner of the Barry Holt Award for Outstanding Practice at the IIRSM’s 2019 Risk Excellence Awards in May this year has further increased the organisation’s profile, says Ian.

“People are interested in what we do now, which is great. The award win, the opportunities for CPD and the networking: it’s been nothing but positive since we joined IIRSM and I would certainly recommend corporate membership to other organisations.”